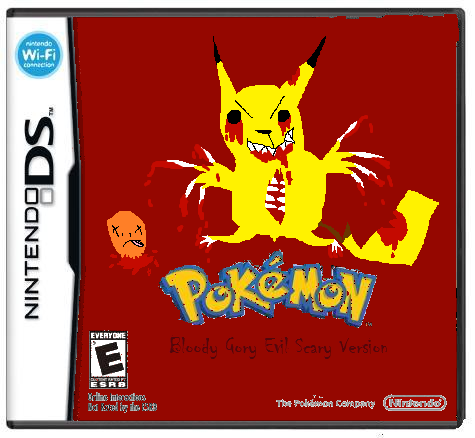 I vas at a yard sale and I found a Pokémon game zat vas called 'Pokémon Bloody Gory Evil Scary Version'. Ze cover vas kind of scary and had a bloody Pikachu viz a Charmander's decapitated head next to it but I vas desperate for a new Pokémon game. "Vow, zat looks cool! I vill fuckink take zis shit now! Fuck you, losers! You get no money for it!", I screamed at ze mozzerfuckers zat vere runnink ze sale before I fuckink took ze game vizout payink. I pissed and shat on zeir yard on my vay out too. Anyvay, I vent home and played ze game.

Ze title screen popped up and it vas very scary and gory. Ze Lavender Town music played on ze title screen and ze character selection screen. Ze character choices vere a boy and a girl zat boz had blood on zem and zeir organs stickink out of zem and had no eyes. I chose ze boy but ze professor guy, who vas also bloody and gory viz no eyes, said "No ur a gurl!!!!!111". I vas like, "How ze fuck do you know I'm a girl?!", but I vent alonk viz it and chose ze girl instead. It asked for my name and I put it as 'Sally' but ze professor guy said "No ur name is Valasta!!!1!! Ur full name is Valasta Obsidian Clarinet Antarctica Yanovnenskisenskaya!!!!11!!!1!!". ZAT VAS MY REAL NAME!!!!! I vas like, "HOW ZE FUCK DO YOU KNOW MY REAL NAME???!!!!!". But zen I realized zat zis could just be a hack and kept playink. So all ze starters vere covered in blood and had zeir organs stickink out and had no eyes. I chose Charmander because he vas a fire type and fire types reminded me of ze time I burned down ze neighbor's house after she got mad at me for makink out viz her dog and shittink on her lawn. Anyvay, I continued viz my Charmander who I nicknamed 'Arson'.

Ze Lavender Town music vas still playink so I assumed it played everyvhere for some reason. I zen caught some more Pokémon in ze grass. Zey vere a Pikachu who I nicknamed 'Vodka' and an Eevee who I nicknamed 'Kvass'. Boz of zem vere bloody, gory, and eyeless just like Arson and everyvone else in ze game. Zat vas pretty creepy, actually. Anyvay, I vent and battled a bloody and gory Diglett viz zem and it said "Wild Diglett died!". "Vhat ze fuck, zat's not supposed to happen!", I screamed at ze game. My mom heard me and told me to be kviet so I told her to shut ze fuck up. Anyvay, I continued playink until ze game said "Arson is hungry. Vodka is angry. Kvass is lonely". I said "Vhat ze fuck?! I haven't left zis game all day since I got it!". Zen ze game said "Arson doesn't like waiting. Arson bit Valasta." "OWWW! Vhat ze fuck?!" I said as I felt a pain in my arm. I brushed it off as a papercut and continued. Zen ze game said "Valasta was mauled to death by her Pokémon!". "VHAT ZE FUUUUUUUUUUUUUUUUUUCK????!!!!!!", I screamed super loud. Zen I heard somefink comink tvords me and turned around and screamed.

So ze next day I voke up on ze floor in my room. My DS vas shattered against ze vall and my 19 bottles of vodka I stole from some adults' party vere all empty and broken on ze ground. I fink I had some ozzer shit lyink around too.

And so zat vas how my veekend vent.